Back in the 90s, I wrote short stories and poem because I loved it. And all the stuffs I wrote, I kept it in the drawers. Not many people know I wrote these stuffs except my beautiful niece. I wrote and I kept it. That’s it. I never get it published. My niece inspired me long time ago when she wrote same stuffs too and she got it published (if I’m not mistaken in local newspaper).

When I reached 18 years old, I stop writing. I wanted to believe that my passions are all about sciences. Dreams I dreamed mostly science related like I want to be an engineer or pharmacist. Of course none of these happened. I ended up earning income in the line of accounting (the subject I used to hate the most when I was in high school) for four years before pursuing the line of operations and managements in Logistic. All I have learned were numbers and people skills but none of these lead me to write.

Circa 2005, a friend of mine suggested I write drama script but I didn’t go for it. In 2008, I tried to write a blog but after few posts, I got bored. I don’t usually share about my life online. I prefer to write something inspiring or stories about love and life. But all I did was stop to write.

Two years later, when I realized that I got a lot to inspire people through writing, I decided to write again. This time, I narrowed down to motivation and personal growth. I’ve told myself after all the clues given to me from time to time, why should I stop? Equipped with motivation I had with me that time, I’ve told few people about my dream – to be a writer. Many disapproved because it is hard to make money through writing. Besides, my English is not that perfect. So I agree with them. Only this time, I decided not to stop.

One of my dreams is to get my articles or story published in magazine or newspaper. I approached this magazine (Waves Lifestyle Magazine) in 2011 but I didn’t get the shot. Later on, somewhere in August 2012, the editor of the magazine, Ms. Priya Manikam offered the opportunity for me to write motivation column for their magazine. She required a sample but I sent her two samples. Turned out, she loves both of it. She said (and I quoted);

“Your column is well liked by us. Keep staying inspired and take care”

Today, I received the hard-copy of the magazine and saw my first article titled: Inner Healing for Loneliness in page 36. After I took some photos, I walked to the book shelf and grabbed my journal. I flipped the page where I wrote Goals and Dreams to Achieve and checked off these two items:

Be a writer.
Publish articles in magazine/newspaper.

….And I’m glad I didn’t stop like I did before.

Me and the motivation column

Waves Lifestyle Magazine is a free magazine available in Johor Bharu and Singapore. You can subscribed the magazine for updates and information via Facebook.

3 thoughts on “The Story about Me and Writing” 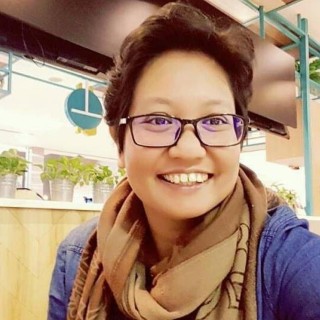